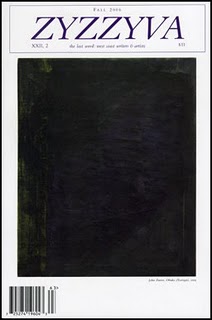 They lived outside Tonasket, Washington, a town of dying orchards. Their parents were subsistence farmers and back-to-the-land types, ten miles out on an unimproved road, surrounded by knapweed and sage and craggy, lichen-covered rocks.

All the people in her life were boys. They were what the townies called "hillkids," smelling burnt and living in houses that might not have electricity or regular hot water, kids who shot rifles and helped birth calves. They sharpened sticks and fought each other; they iced their snowballs before they threw them. They rode bicycles and built forts out of birch bark and fallen pine boughs, and so did she.

She was the smallest Billy goat, they were the gruff. She kissed them if they asked for it. Or took off her pants. It didn't matter.

She would not let them see her cry. These were boys fed on goat's milk and wild birds, and none of them really believed in magic the way she did.

At her house, they kept honeybees and pigs, chickens, cows, and, occasionally, guinea hens. Her father would smoke the bees out of the hive, and he would hop the rail of the hog pen and get behind the hog and slice its throat and hold its head back so the blood would drain into a trough. He shot cows between the eyes. He was a Vietnam vet. He was an excellent mechanic. Sometimes they had venison. She wouldn't eat it. She said she would eat meat, but she would not eat things that frolic.

In the summers, sometimes, her parents would go out and burn the bunchgrass and cheat and knapweed around the edge of the yard and the garden, where it choked the rows of marigolds and spinach. The fires were small, controlled, and she did not like them. What she liked was to take a piece of string-they saved twine off the neat rectangles of alfalfa her father mowed and bailed on a post by the barn-and tie the tops of the bunchgrass together. She would smash down the center, push out the sides and make a little hut for herself. She could fit right in.

Her mother would let her walk to see the boys even when she was very small, because it was the country and there was no one around they wouldn't know. Once, in the dead heat of late summer, she wanted to see Caleb, who was three months younger to the day. She had a route through the yellowed grass, and the grasshoppers came up all around her, and she hated their brittle bodies and their spiny legs and the way they felt when they brushed her knees.

She was scared that afternoon because she thought she heard rattlesnakes, and she screamed as loud as she could, though she had no idea who might hear her or if snakes reacted to noise. Did snakes have ears? Did they? And she stomped her feet and later, years later, she realized thechshchshchshch sound she heard was cicadas, not rattlers; it was a cicada year, but her fear and her memory of that day didn't change: there was something in that grass, and she was on her own.

And she grew up to have her own problems-the recurring dreams of the forest fire that came through their mountain and, when the ash cooled, sent most of the families packing.

Troubles stuck to her like cockleburs-glasses amber with whiskey and beer; jewelry lost in strangers' beds; the fear of sleep and of waking up alone; terror like the smell of violet perfume-surfacing and disappearing with its own purple logic. For years, she had been a smooth, cool eggshell hiding a half-incubated chick underneath, waiting to break.

Some of these boys she met later, as if in another life. Different countries and colleges and crashed cars later, she would be their neighbors again. She would have dinner with them, Caleb and Joel and Dashiell. They would live under a sky of slate gray, and they would talk about the idea that something went wrong there, and how they could not name it or let it go.

They would notice the mortality rate among them-those they knew had the tendency to run or disappear-the way dirt children turn easily into mud.

Caleb grew up to be manic. Imagine being in traffic on University Avenue, Seattle, and looking up to see him, his polished cobalt eyes, trying to claw through your sunroof. Imagine you have loved him, have held his body close, and you wake to see the bed you share burning on the front lawn. Imagine you have rented him a room that he destroys with a chair and a broomstick.

Jake went to California, had a nervous breakdown, and came back.

Jeremiah died bent over the hood of his truck, which had stalled on the highway, sideswiped by a drunk driver.

Jared tipped his motorcycle on a test run, and his brother Aaron, who played the flute and had become a nurse, was following close behind but could not revive him.

Dashiell was pulled staggering from his car by a police officer, whom he later punched.

Micah went to Iraq to build houses and couldn't stomach the lockdown each night, so he took a crew with him and headed for Angola. He sent for his little brother. They are out there still, hammering.

Luke was hit twice in a drive-by shooting in Arizona, but survived.

She continues to wear these boys like scars. They would always be her sworn enemies, and she would always love them fiercely. And if she goes home, it would be only with them, in their arms, in her corduroy dress and tennis shoes, her hair grown long, matted with weeds. Maybe one-or all-would take her up the hillside or through the canyon or to the spring or to see a pile of horse bones. They had scared her, those boys, they had left her bloodied and bruised and choking tears, but they had never, ever left her alone.