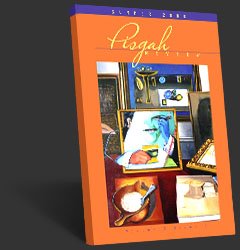 
In the fire time we lived for days without sunlight or air.

You and I grew up in the eastern Washington desert, the dry side of the Cascades, where we spoke of rain the way we spoke of the dead: with reverence, with longing, without hope of return. We lived in the country, and I mean all of us. Everyone we knew in the world.

Even as small children we picked rocks, piling up the pebbles and larger hunks of shale and granite into little pyramids around the perimeter of the gardens, where there would be a thicket of marigolds—bright-yellow-and-orange ruffles planted because the stink kept the insects down.
But if we weren’t doing our chores or at the neighbors, we spent time out on the low, brown hillsides, trudging among the trees turned brittle and along the dirt cow paths. Up in the land behind our respective homes, there were spindly timbers and scrub and dried lichens on the exposed rock. So, we would find a walking stick and get to it.

The year of the fire, it had not rained for months. Maybe it was a decade with no rain; no one knew. I remember the sizzle of everything, the way my hair had gotten dried and broken at the end, and I was all static electricity and dust. My parents’ well was failing. Our yard was long gone, and the lilac bush slumped against the side of the house, blooms dropped and drying around the base. The strawberry beds and the raspberries were paper. We had a plot of wilty potatoes, a cherry tree, and brittle greens, though nearby our southern neighbor’s heat-loving wheat fields glowed as gold as a pharaoh’s polished tomb. The fields were on a plateau, where the land was mostly flat and open, but there were a few pines poking out through the yellow stalks or fallow dirt; shade and topsoil were precious, and the farmer had not wanted to cut the trees or destroy the root systems that held the ground in place when the wind blew, even if it meant extra turns on the combine.

In the fire time and before, we all spent a great deal of time concerned with food. My family cleaned meat and honey in an outbuilding off our house. Part of which we would trade for the northern neighbor’s cheese.

There was an extractor for the honey—a big, galvanized barrel with screens inside that the combs could hook into. It was manually operated, and I could turn it if someone would get it started for me. The honey splattered out of the matrix of wax and was collected from a spigot at the bottom, amber draining into the glass gallon jars we also used for milk jugs.

In season my father would hang beef or pork or venison from the winch that was mounted in the rafters. Before he took up bow-hunting, he made his own bullets, melting down wheel weights to smelt lead into shot for the muzzleloader or carefully filling shells with gunpowder and saltpeter. The winch had a big hook attached to a chain, and it wasn’t initially there for a butcher—he had installed it so he could pull an engine. If there was nothing up, my brother and I and sometimes you would yank the pulley chain until the hook was a good height and swing back and forth on it. But when there was an animal there, I was set up with a bench and a low table and two big, stainless steel bowls. One bowl held scraps and one held ground meat, and it was my job to run these scraps through the electric grinder, which was painted tractor-green. Every once in a while, the grinder would clog, and then I was to run a piece of hard fat through it, and I enjoyed the sound it made as it churned through—almost like popcorn popping. 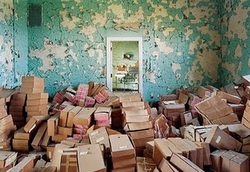 But besides that part, I did not like these chores, the sticky smells, the glassy eyes of a deer (my father, for years, would toss the buck horns on top of the woodshed, and there they stayed, pointed bone, until, fearful of fire, he moved the wood away from the house and tore down the shed). Or the beef hide, rotting down on the burn pile: I saw early on that even a fast death was pretty slow, but we turn cold easily, and the blood of different beasts looks the same where it pools around the exit wound, sinks into the ground, and disappears.

The night the fire started, I didn’t know where you were. I hadn’t seen you that day, because I’d been absorbed in a stack of old, over-thumbed magazines my mother had brought home from her work’s lobby. It was hot. If I stayed perfectly still, I was almost comfortable, but the minute I moved, the heat would swirl around me like when I ran bathwater with too much red and not enough blue.

I remember how clearly I wanted night to come and along with it the promise of at least a minute of cool, but instead, the sky opened, electric.

My mother let me stay up past midnight, so we could watch the hillside blaze. Even from miles off I heard the sound of the trees exploding, a hundred years of pine gone. I don’t know how I felt besides in awe of the ignition or if I had a sense of the way flame moved.

A day or two later, after little success as our fathers scratched at the dirt with their axes, trying to loosen enough earth to suffocate the flames, the families on our rural mountainside tried to control-burn their own land and barns before the lightning fire got there—an attempt to leave no fuel so they could at least save the houses. The roads closed. The gardens were singed. Our mothers cooked whatever they could find to feed their lovers and husbands, grown and half-grown sons, including a pig they took down with little more than a kitchen knife. Any one of them would have known how to handle a small rifle, but even circled by fire, they killed her the clean way—bled her into a trough before the gutting.

Perhaps my mother did this. She was good with a knife or even a hatchet. In my lifetime I couldn’t count the number of chickens I’d seen her behead—picking them up by their legs, flinging them onto a round of wood, and lopping them off at the neck. They really will run for a bit but it’s only a second or two.

They decided then to evacuate the children and send them to live for a few days in the nondenominational church in town. In the heat a helicopter landed among the wheat, and you were there with me in the back of a silver van with heart-shaped windows. Where was my brother, your sister? I don’t know. But I sat next to you in our getaway vehicle, your sunflower hair and eggplant eyes, and I prayed nothing would separate us, ever. More helicopters came— we were children who played war and who would chop the heads off snakes with a shovel or a sharp rock, but we had never seen anything like these choppers, as we so expertly called them— dropping enough buckets of red fire retardant to make a little portal along the roads, and that’s when we went speeding through in the silver van on the way to the church, and we watched another huge machine touch down among the charred alfalfa and the ruined wheat.

At the church we both heard two of the town men discussing the fire. We heard them talking about what kind of people lived there, on our mountain, how it was just a bunch of hill people anyway, how we deserved to burn. I remember your face. I think we hadn’t known this then, that we were that different. As an odd job, my father even drove the school bus that wasn’t really a bus, but a converted four-wheel drive panel van painted yellow with DISTRICT 404 stamped on the side. We had barely started our years of education then, though we knew that some people had inside toilets and all their food came from the store and they didn’t wear hand-me-downs like we did. We just didn’t know it mattered.

My parents kept their home, their barn, their outbuildings. Their upper tract burned, but, ultimately, we were out little. Even our well came back and came back clean. I had a pony—not a fancy ribbon-in-his-hair pony, but a work pony with lower GI distress, who farted constantly when he walked, and he got a stick in his eye, but one of my father’s friends extracted it.

You, though, you lost nearly everything. All that was left, by the rock outcropping where your parents had built the home you all shared, was a blackened concrete foundation slab where your house had been. The chicken coop stood, though even the chickens were ash.

Years later we hiked back there on the trails we had traveled as children, with our grown shoes too wide for the paths, and from there we opened the coop door, which came unstuck with a sound like cartilage separating from bone. Inside there was nothing much: the molting of long-dead birds and a smell from a time when we sat in a church where we were not members and cried so hard we choked. Remember how I cleaned one of the Sunday school rooms, even putting all the chairs up on the tables so I could crawl along the floor and pick the scraps out of the carpet, and then you and another boy came behind me and knocked it all down, upturned the bins of broken crayons and tubes of glue I had sorted, and shredded the picture books? I think you already knew then, with a certainty I still cannot match, how the fire would change us.

Before the ground had even cooled, your family and most of the others left the mountain. You moved to a house in town, and thus began our parting. I stayed on our hillside, learned to gather the morel mushrooms and the stands of fireweed that grow in the years following the torching of a forest. My family harvested the scorched pine and tamarack and used what was left of it in the woodstoves through the deep winters. We took only the trees that were dead, and every year, during the summer and fall when we’d go cutting, we’d be dusted in charcoal again, the burnt bark crumbling in our hands.

I still fear electrical storms and a spark in a dry place. I still remember the way the sky darkened and the smoke bloodshot our eyes. I still remember the ethylene sting of crackling-dry air, and I remember how, the day you visited and we cracked the seal on the chicken coop door, with the evergreen needles and sage around us that had started to grow back in violent-green, how I hoped, like I hoped for rain that summer and how I hope for you now, to come home.